Any domestic cat owner knows the struggle is real when it comes to getting your feline to exercise. Imagine your cat is 120 pounds and can outrun your race-ready dirt bike, but acts like “Fluffy” the house cat when it comes time to go for a run.

Cheetah expert, Sarah Roy of Wildlife Safari in Winston, Oregon lives this struggle. “Cheetahs are a lot like your house cat when it comes to exercise, they sleep for about 15 hours a day”, she says. These cats may sleep a lot, but don't let that fool you.

These big cats of the African continent are the fastest land mammal on earth and can peg the speedometer at 70+ miles per hour. More impressive though, they can achieve their legendary top speed in just a few strides.

But, explosive speed comes with a price. Cheetahs don't have a fight response.

"They're one of the best hunters out there as far as accuracy. They catch more prey than almost all the other big cats, but then they loose it. Even vultures will steal their prey, because cheetahs don't risk fighting over anything... if they get injured at all they can't reach their top speeds," Sarah explains.

To make matters worse, Cheetahs have to rest for long periods of time after chasing their prey. Sarah explains, "When they run up to their top speeds of 70 miles per hour, their body temperature spikes up and they literally have to lay down for 30 to 60 minutes and cool off [before they can start eating> or they'll get brain damage. So, anything can come along and take what they caught."

This flight over fight instinct makes the cheetah's survival in the wild a very difficult proposition. "Because they're more of a flight response than fight response, they get about 50% of their prey items stolen from them which forces them to hunt daily," Sarah says.

While the cheetahs at Wildlife Safari have some spectacular real estate to lazily lope around in, until recently they lacked a reason to do what they do best - sprint.

About 4 years ago, the team at Wildlife Safari began to test out a new tool to help enrich and enforce the call of the wild that pulses through these normally docile cats. The so-called 'cheetah lure' is a high speed reel that draws what looks like prey across the ground at cheetah hunting speeds. The cheetahs, with their binocular eyes and explosive speed, give chase immediately and fulfill their wild instincts to hunt while getting necessary exercise.

"Everything we do is for the enrichment of the animals." Sarah Roy says of the lure system. "When they catch their prey they are rewarded well," she says.

It's also a phenomenal sight. "When they get going and their tail is whipping around and they can turn on a dime at their top speeds - it's absolutely amazing to see." Sarah says of the high-speed ballet between prey and hunter. 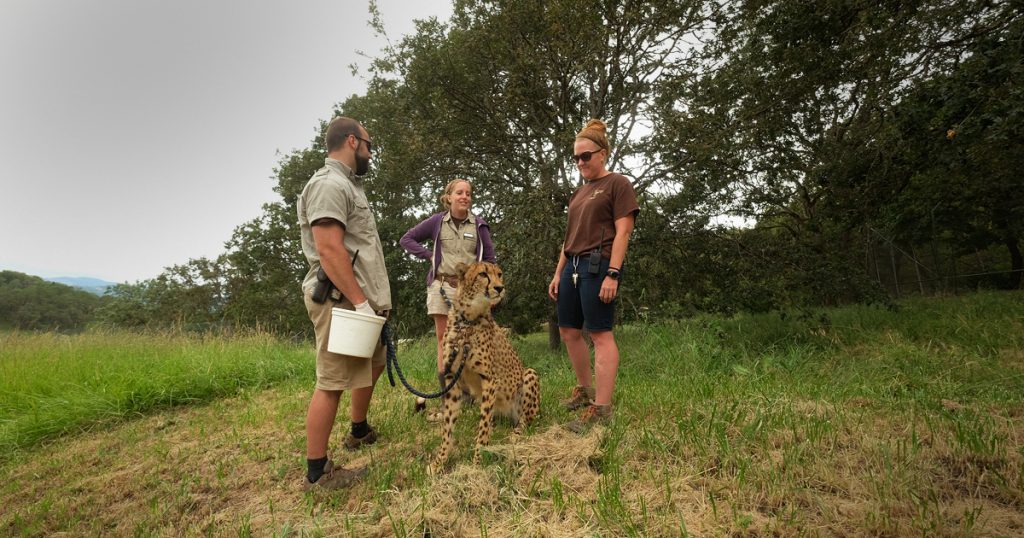 Sarah and the rest of the team at Wildlife Safari know a thing or two about cheetahs because they're one of the top breeders of these species, who are classified as "Vulnerable", indicating a declining or fragile population.

Over the past 40+ years, the Oregon-based cheetah breeding program has risen to become one of the best in the world. Through their efforts, the team at Wildlife Safari have helped increase genetic diversity in the cheetah population and earned top honors worldwide for their ability to breed these finicky cats.

Unlike almost any other cat, large or small, cheetahs are very difficult to breed. They need a very specific habitat, and the timing and conditions of the encounter between the male and female are unique to this particular species.

Wildlife Safari, a privately owned and funded park, has just the place for this kind of program. The brushy hills and mild climate of Douglas County make for the perfect home for cheetahs outside their normal habitat.

The rural Oregon home for these amazing speed demons is open to the public year-round. Visitors can drive through the park and see a veritable Noah's Ark of animals from all over the world, all from the comfort (and safety) of their own car. Proceeds from ticket sales help fund the world class cheetah breeding program and others like it around the world.

If you're looking to catch a glimpse of a high speed cat in a wild setting, drop into Wildlife Safari. Stay in the car though, it's the only thing on the ground faster than the cheetahs.

Coastal is partnering with Wildlife Safari to help develop the cheetah lure project because we believe in supporting organizations and communities working together to make the world a better place. Whether it's sponsoring your 4-H club project, FFA chapter, or helping the worldwide cheetah population, we believe in the value of supporting community.

Over the next month, Wildlife Safari will be developing a larger, more robust cheetah lure space for the health of their big cats. The cheetah lure expansion will also provide an opportunity for young and old alike to see these beautiful animals in their element. In addition to being an excellent educational opportunity, the cheetah lure exhibit will help fund further research and development of programs that help animal populations around the world.