Ask just about any Northwest fly fishing enthusiast to name their favorite river and the McKenzie usually makes an appearance on that list. The McKenzie is about as wild as they get anymore, challenging oarsmen and casters alike. The waters that originate in the Cascades are usually calm with occasional class 3 rapids thrown in for good measure. It’s the kind of river that welcomes locals and awes tourists.

On a slightly overcast, late spring day, the world-famous Billy Pruitt is taking Geoff on a trip down this legendary river. The pair met at the market in Vida, just about 30 minutes east of Eugene on highway 126. After a quick introduction and a last swig of coffee, the adventure got underway from the Silver Creek boat launch.

Billy Puritt has been guiding folks down this river for just over 40 years. Today, he’s taking his passenger down 12 miles of pristine, fly fishing paradise.

Despite the swelling waters due to heavy snowfall, Billy effortlessly slips their drift boat down currents and around menacing rocks, bringing Geoff in line with some of the river’s best honey holes.

“Fly fishing is like golf,” Billy laughed. “They both take time, practice, and a bit of money. I take people down this and the Middle Fork Salmon River every summer. It’s a seven-days-a-week job.” 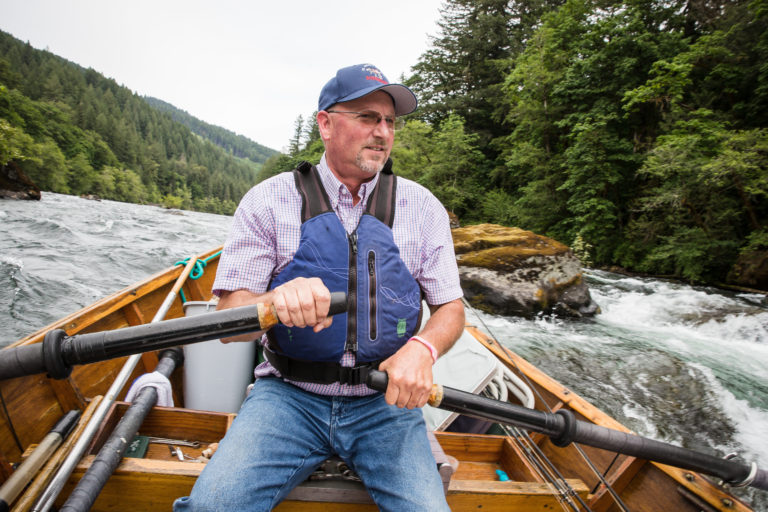 That love for the river and nature started with his dad and great uncle.

“My great uncle started guiding in the 1920s out of a drift boat,” Billy shared. “My dad, Billy Pruitt Sr. did it too.”

Billy’s been guiding since his early teens. Over the decades he’s learned how to gently instruct new and seasoned anglers alike. It’s all thanks to his patient, good-humored approach of mingling interesting stories with insightful instruction.

“You don’t have to be a good fly fisherman to come fish with me,” he explains. 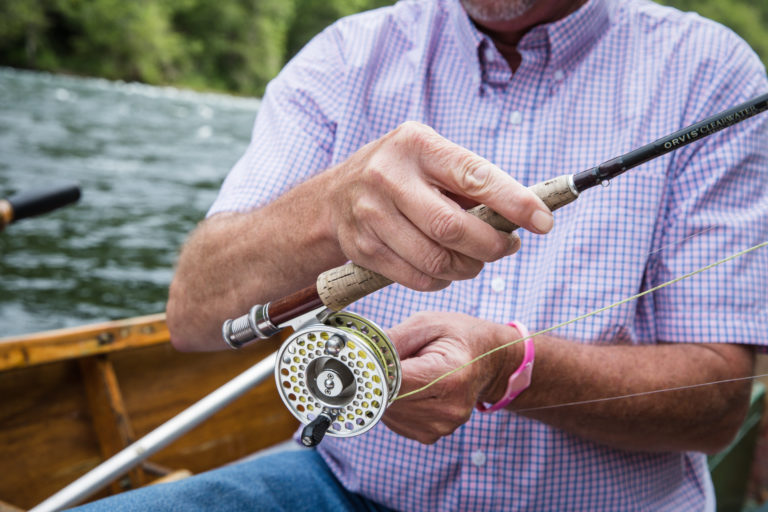 Anyone who has ever gone out with Billy agrees. That includes Geoff, who isn’t your average, run-of-the-mill angler. He knows his way around a line and lure. But even he learned a lot from his time with Billy, including rod handling, line control, and the most effective way to fish from a drift boat.

Using wake flies and some hints on slowing down, Geoff reeled in their daily limit. As Billy explained, “Fish don’t eat speedboats!” As usual, he was right.

Today’s adventure was worth the time out of the office. “The fish were active from top to bottom,” Geoff said with the smile of a happy fisherman. “They took wet flies in the current and dry flies on the surface. An outstanding day on the river.”

That outstanding day was about to get even better when they reached shore. Billy broke out one of his infamous Dutch Ovens and began making lunch. 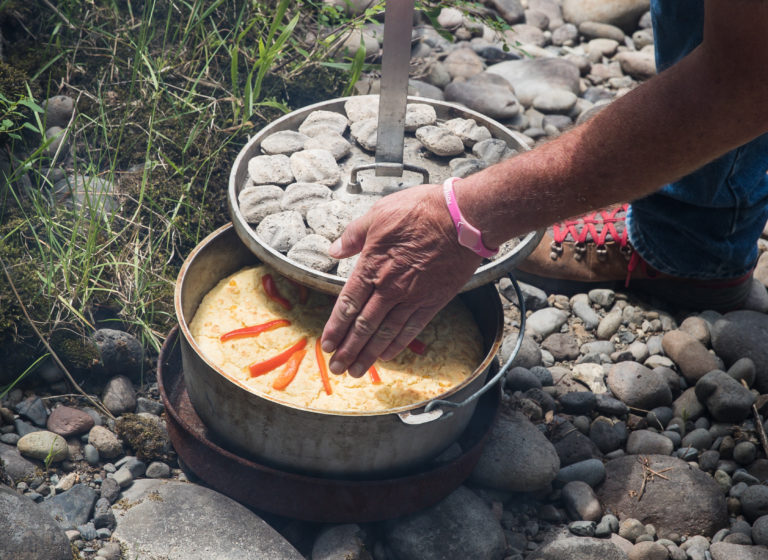 This world-famous guide is also an award-winning cook, effortlessly pan-frying a few rainbow trout and turning handful of ingredients into a meal, including streamside cornbread and cowboy coleslaw.

One of his Dutch Ovens is big enough to cook 55 biscuits at one time. It’s something he breaks out when he’s guiding a larger group. Today, he used one of his smaller ovens. Cooking onshore is what he calls cowboys and river style cooking. 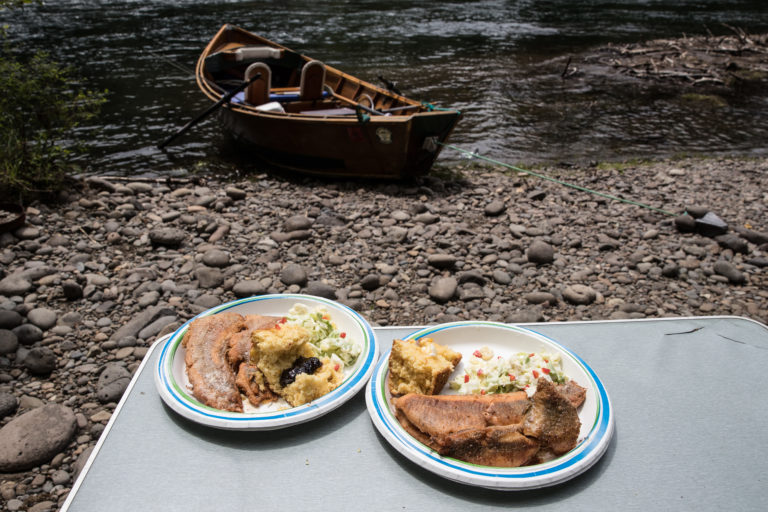 Anytime you take the road less traveled, you’ll find guys like Billy Pruitt, avid fishermen like Geoff, and towns of people just like you – folk who gladly put in the long hours, believe in the American dream, and look for every opportunity to roam their own property or spend a day fishing the McKenzie.