In the Northwest corner of Oregon sits the small town of Vernonia. A little over 2,000 people call it home, including Gretchen Stelzenmueller, owner and craftsperson at Gretchen’s Saddlery. Coastal had the chance to meet with Gretchen and get a glimpse at what she handcrafts, including made-to-order, comfortable western saddles.

Since 1999, Gretchen’s Saddlery has been creating saddles, tack, and leather goods at affordable prices. She’s particular about the type of leather and brass parts she uses, because like her, country-folk want things to last. 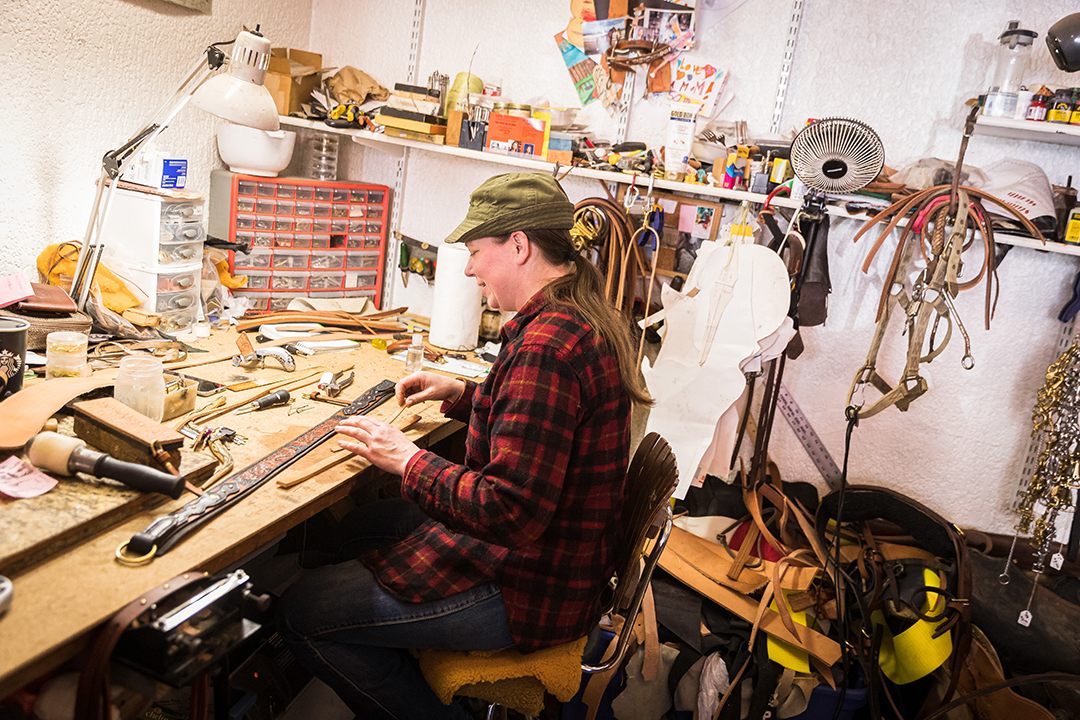 “I do a lot of tack repair,” Gretchen shared when asked about the items she works on most often. “I also do holsters. Knife sheaths, purses, and a lot of gun belts with cartridge loops. I even made all the leather parts for a stagecoach once.”

Handcrafting a saddle or working on tack isn’t just something you pick and do. For Gretchen, that journey started when she was young. 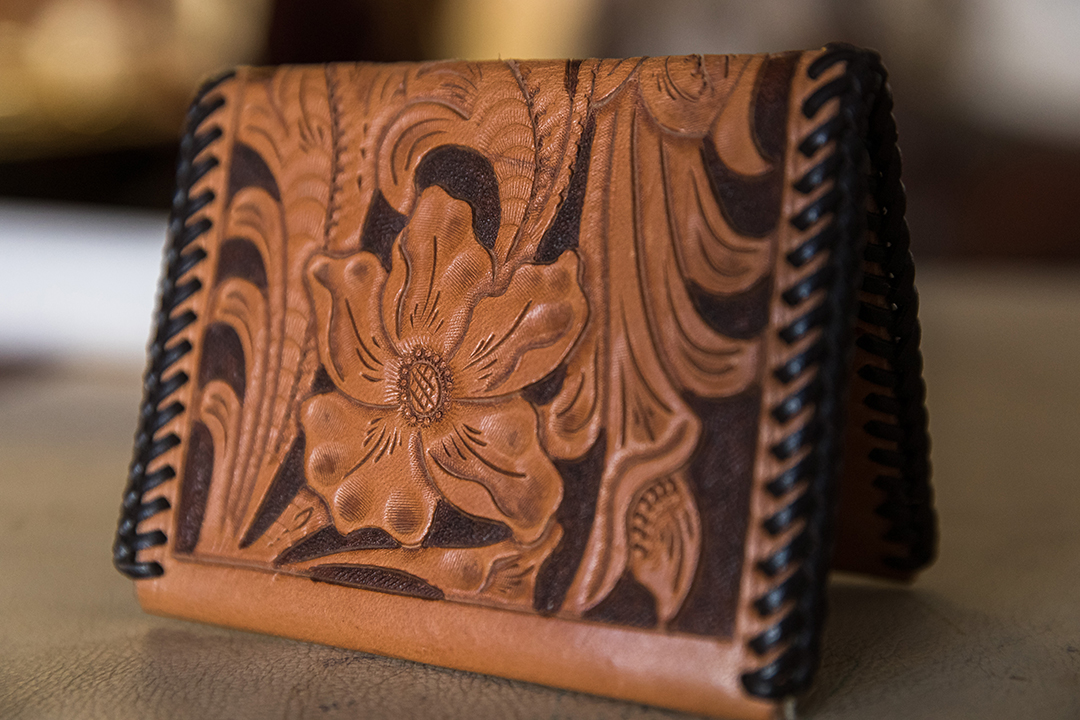 “I started making things out of leather in our tack room when I was little. Then, I went to work for a guy who owned a shoe/tack repair shop making strap goods and doing saddle repair.”

When she was 19, she decided to use the money she might use for college to take an intensive saddle making course from one of the masters of the trade.

“After doing a bunch of saddle repairs, I decided that if I was going to do repairs, I should learn how to make a saddle, too. The guy who taught was Dusty Johnson out of Arizona. He’s one of the best there is. His course is just two weeks long.”

To this day, Gretchen still refers to Dusty’s books, along with materials from Al Sohlman and others. She could probably write a book of her own. But for now, she’s content raising her daughter, taking care of their many animals, holding a full-time job with the local school district, and working 20+ hours a week handcrafting items.

“We have two mules, a horse, cat, Guinee pig, fish, and a dog named Basil,” she added, laughing to herself. “I love animals...and Coastal.”

Gretchen and her daughter like Coastal for the clothing styles, boots, and one-stop shopping for everything her family needs.”

“I just go to the grocery store and Coastal. That’s it.”

When asked about her favorite saddles, Gretchen shared a little history of ones she’d owned over the years and what brought her to craft western saddles that defied the odds and were actually comfortable. 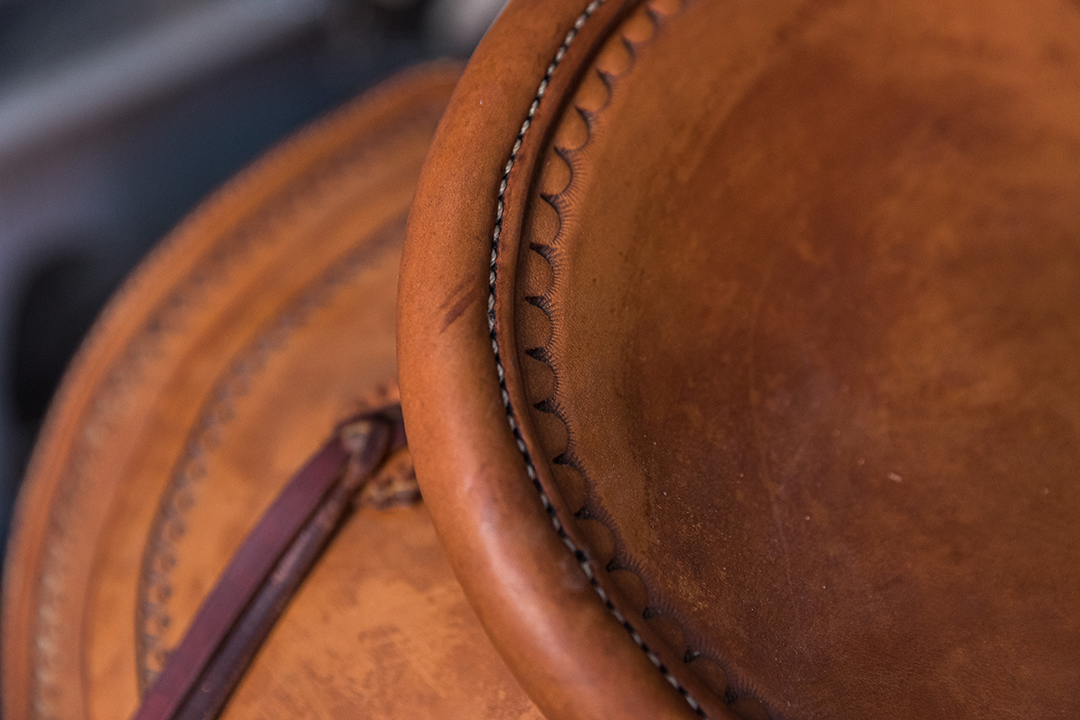 “My first saddle was the one that came with my pony I got for my fifth birthday,” she said. “I don’t remember anything in particular about it other than I was able to put it on by myself. When I outgrew it, my parents bought me a larger saddle. It was much heavier and I needed help to put it on.”

A friend at school introduced her to English riding and much-lighter saddles.

“I was fascinated because I had only seen one in the movies. It was much lighter than mine. I put an ad in the paper, sold my old saddle, and bought an English one.”

After learning how to make saddles, she quickly discovered she could make improvements to the tried-and-true methods.

“I hated western saddles until I learned how to make them because the majority aren’t made correctly. Most seats are not the correct shape to actually be comfortable. I fix that with mine. When someone orders a saddle, they usually have some idea of what they want and like about other saddles. I can make it work for them because every saddle I make uses a tree that is made to order. I send templates of the horse’s back to make sure it fits well.”

Everyone at Coastal really likes and respects Gretchen’s handcrafted work. You can find more about her at gretchensaddlery.com.