“Right Next Door” Destinations in Oregon and Washington

Families everywhere are booking hotels and locking in outdoor experiences at some of the best-known destinations in the Northwest. It’s to be expected. But when you’re trying to find a place to stay in places like Bend or Ashland, Oregon, Leavenworth, Washington, or up on the Puget Sound, rising costs and booked-solid destinations can dampen the fun. Thankfully, there are always nearby towns with the same weather, some equally impressive festivals and tourist attractions, and plenty of places to stay. Check out these money-saving, just-off-the-beaten-path options for your next family outing. While you’re in these towns, you’ll find a Coastal for everything you need. 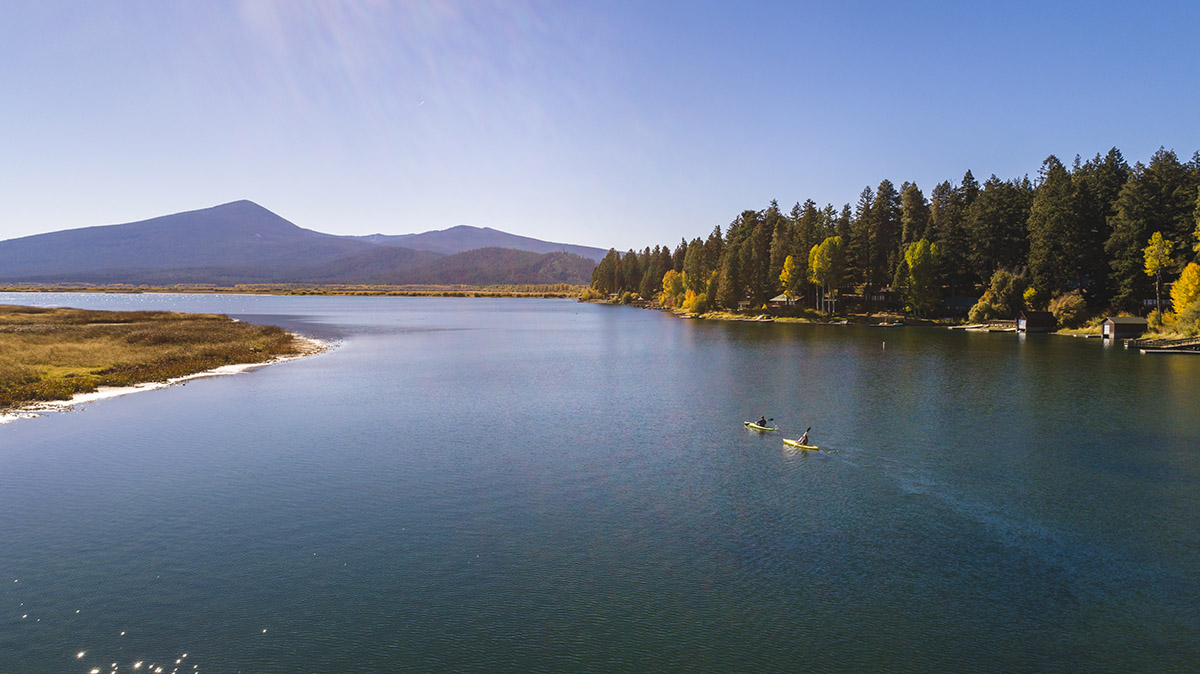 Find a place to stay in Klamath Falls, and you’ll have easy access to Crater Lake and Mt. Scott. Another nearby attraction is the Lava Beds National Monument, where you can explore more than 500 lava tube caves. Heading to a show in Ashland? Klamath Falls is just over an hour drive from the Shakespearean wonderland. Discover Klamath Falls and the region

Tourist favorites: The region is known for its incredible golf courses, including the Running Y Ranch Resort with its Arnold Palmer-designed course. You’ll also find some of the best hiking and biking trails anywhere in southern Oregon. Give the OCE&E Woods Line State Trial a try and you’ll discover a 100-mile rails-to-trails conversion that takes you from Klamath Falls to the nearby town of Olene. Do you like birds? Klamath Falls is home to some of the best birdwatching in the west.

Don’t Miss: The Favell Museum showcases one of the best collections of western artifacts and art in the U.S. Plus, the Ross Ragland Theatre is a hard-to-miss landmark that looks great in photos while rivaling other nearby theatre companies for live performances, including plays, music, and more.

Hidden Gems: The Train Mountain and Klamath and Western Railroad currently holds the 2004 Guinness Book of World Records as the longest miniature hobby railroad in the world. It boasts 35 miles of miniature tracks. Best of all you and the family can take a ride. Call ahead and ensure they are running on the weekend you visit. 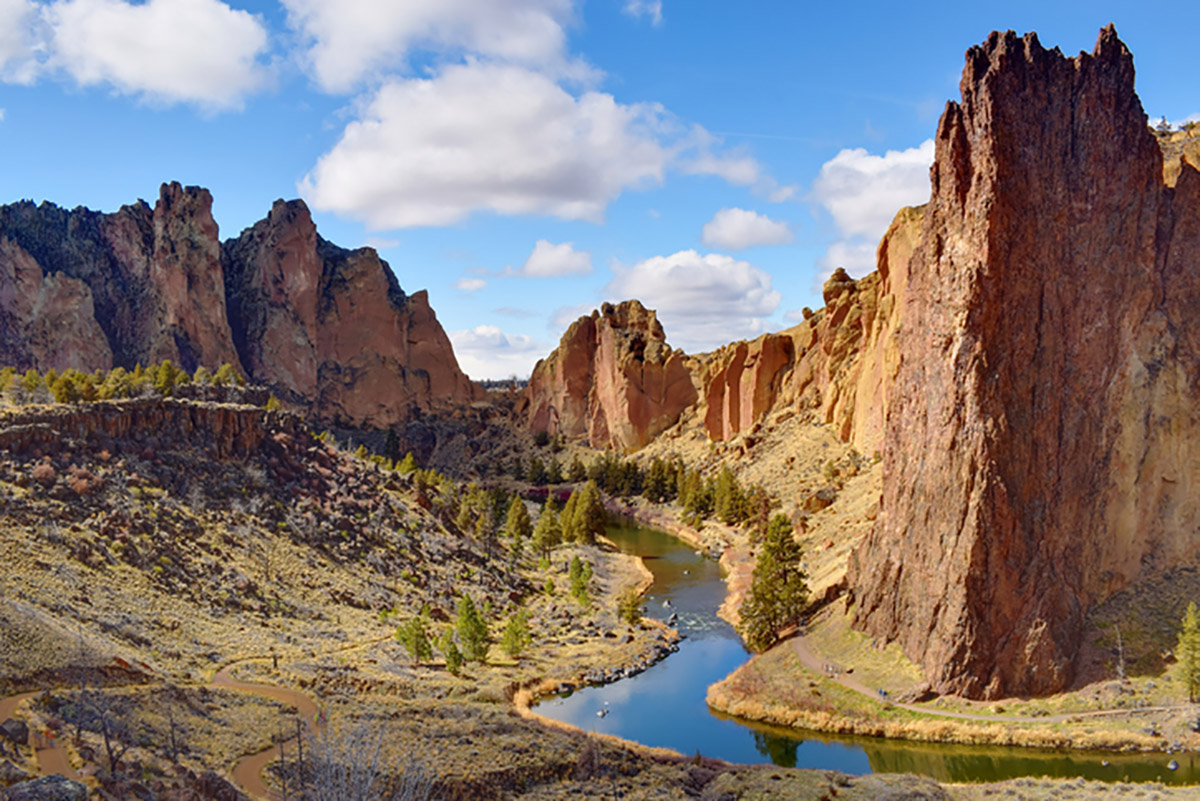 Whatever the outdoor activity, Redmond has it all, from hiking and biking to horseback riding and boating. Best of all, every destination in Central Oregon is a short drive from Redmond, including Mt. Bachelor, shopping in Bend, and Lake Billy Chinook often rated one of the best boating and watersport locations in the state. Plus, the city gives visitors plenty of reasons to stay, including several classic car shows throughout the year, the Redmond Tap Tour, a Bacon, Brew and Balloon Festival, and plenty of local art. Read about Redmond

Tourist favorites: Mountain biking has become a big deal in Central Oregon, and Redmond is home to some of the best trails and experiences in the region. That includes the Northeast Redmond Trail Complex, the Maston Trails at Smith Rock, and Grey Butte.

Don’t Miss: Ask rock climbers around the world where they want to climb, and you’re bound to hear about Smith Rock State Park. With more than 1,800 climbing routes, this world-class rock-climbing destination is a must-see. Not a climber? No problem. There are plenty of awe-inspiring hiking trails and vistas, including the 3.6-mile Misery Ridge loop, which climbs 900 feet in less than 1 mile and rewards the daring with incredible panoramic views of the Cascade Range and Crooked River basin. 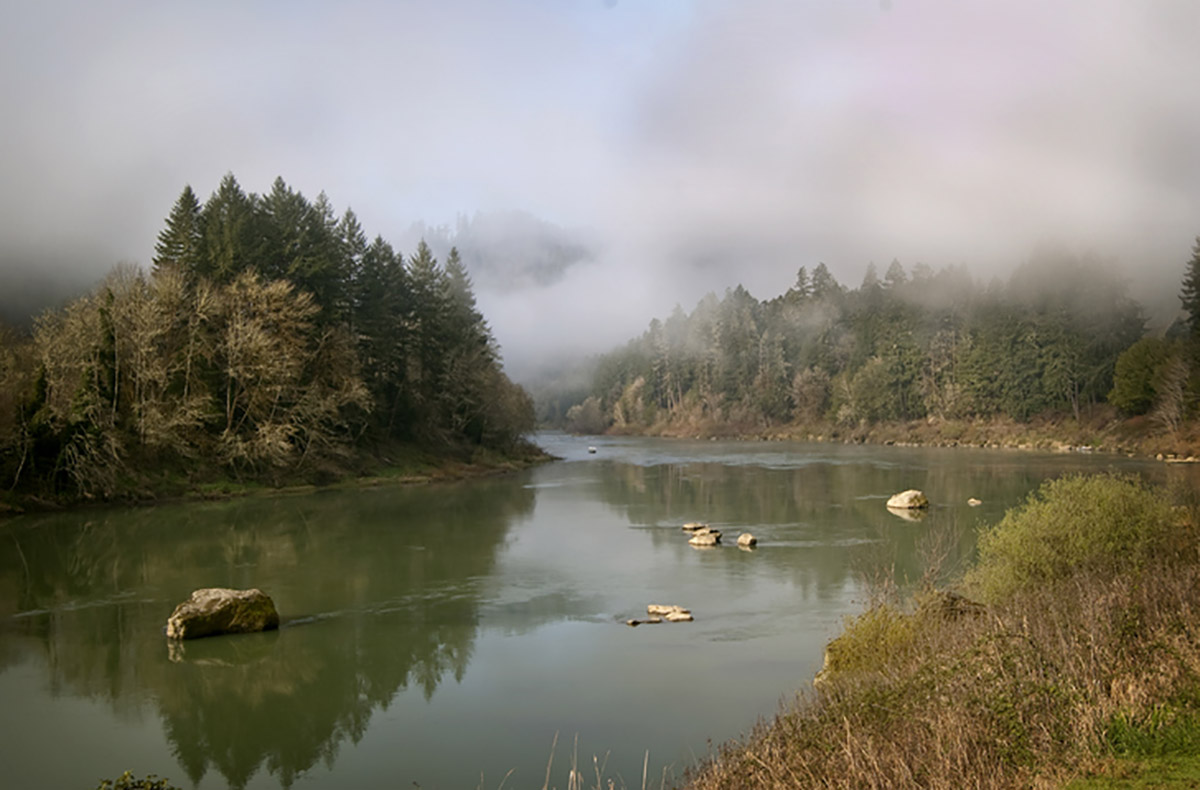 Just off I-5 and nestled along the Umpqua River, Roseburg, Oregon is a hidden gem unto itself. It’s centrally located in the heart of the Land of Umpqua, meaning it’s ideal for outdoor recreation, amazing scenery, as well as its own wonderful attractions and city fare that keep locals happy and tourists coming back for more. Plus, Crater Lake is just a short drive from anywhere in the area. Uncover Roseburg

Tourist favorites: Roseburg is packed with upscale as well as accessible restaurants, brewpubs, and wineries. Tourists also love the North Umpqua for its multitude of recreational opportunities, including fishing, kayaking, and rafting.

Don’t Miss: The Wildlife Safari is a must-see for any family adventure. Located in the nearby town of Winston, this safari allows you to drive your car through 600 acres of pristine hillsides to see all sorts of exotic wildlife, including giraffes, lions, monkeys, rhinoceros, and zebras.

Hidden Gems: The Highway of Waterfalls is a collection of over a dozen natural wonders along the National Scenic Byway from Highway 138 to Highway 97. 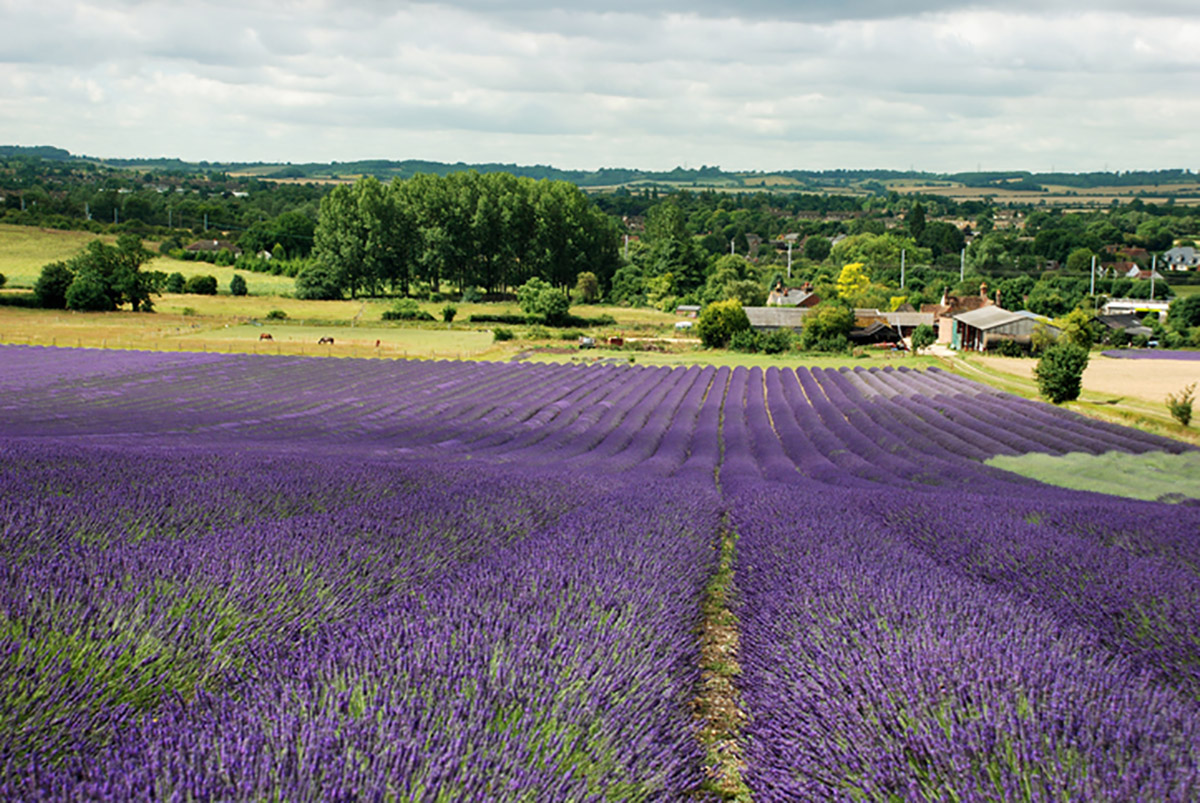 Known as one of the driest places in western Washington, Sequim is also the lavender capital of the world. Here you’ll find an active arts community, vibrant downtown, plenty of places to eat, and access to areas all over the Olympic Peninsula, including the Olympic National Park. And with Port Townsend and Port Angeles often booked out months in advance, Sequim is a welcome and obtainable retreat. Stay in Sequim

Tourist favorites: The Olympic Peninsula Audubon Society is very active in the region and proudly hosts several events throughout the year. Visit their website for guided tours, trips, and other birdwatching fun.

Don’t Miss: Sequim is only a 30-minute drive to the ferry that takes passengers to Victoria, British Columbia. If you have a passport, it’s worth the trip.

Hidden Gems: Every July for one weekend, those lucky enough to be in town enjoy the Sequim Lavender Festival. This wonderfully-scented event is a longtime tradition in Sequim. If you’re in town in May, check out the Irrigation Festival with its arts, crafts, food, and fun. 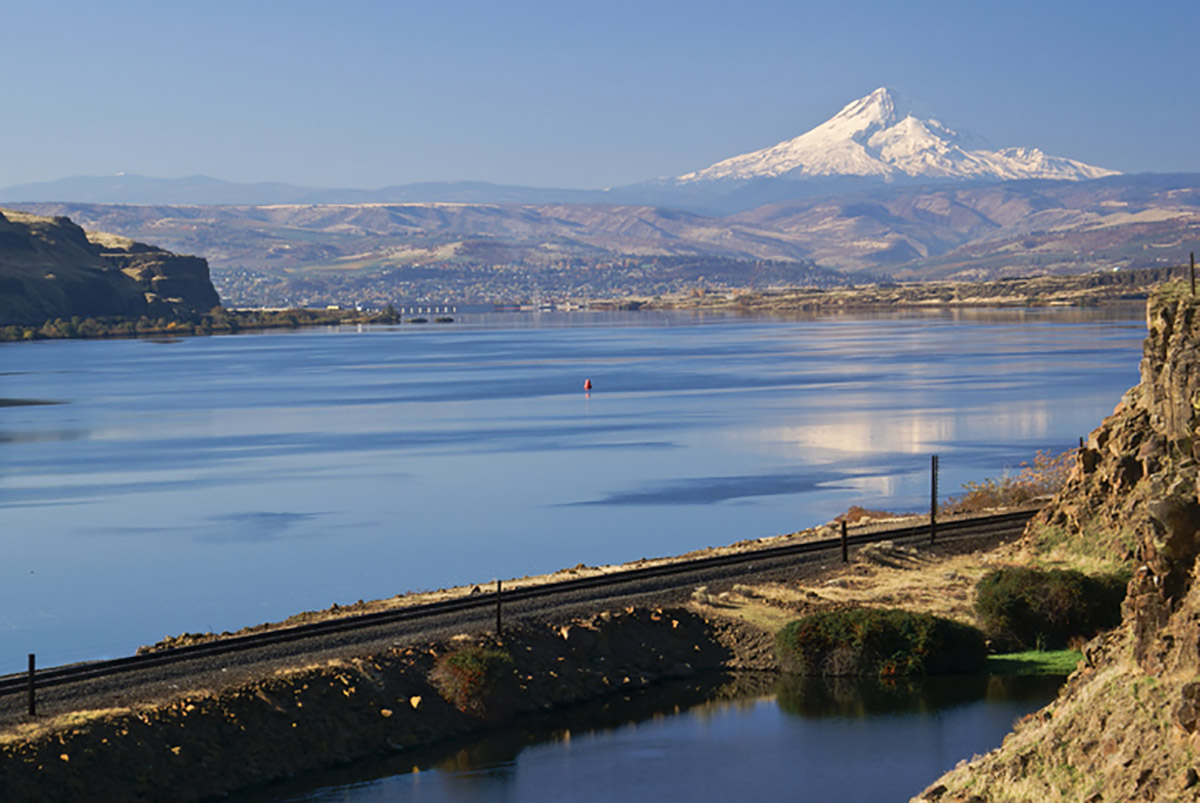 Located just 27 minutes east of Hood River (a very popular destination), The Dalles, Oregon, is also located along the Columbia River. The difference is, you can usually find a place to stay in The Dalles, and the wait for a restaurant reservation isn’t hours long. Plus, The Dalles is a really cool town. Some of the first tourists to the region were Lewis and Clarke back in 1805, and The Dalles was the last stop on the Oregon Trail before continuing to Portland and the Willamette Valley. Get to know The Dalles

Tourist favorites: The Columbia Gorge Discovery Center and Museum features walking trails, plenty of scenery, displays that show how the region was formed over millions of years, as well as items for sale in the gift shop.

Don’t Miss: The National Neon Sign Museum can be found in the historic Elk Lodge Building. This wonder is home to one of the largest collections of electric and pre-electric signage in the U.S.

Hidden Gems: Across the river in Goldendale, Washington, is the Maryhill Museum of Art and Stonehenge Memorial. Yes, Stonehenge. This full-scale replica of the British icon was built as part of a utopian vision. However, this version of Stonehenge is not in a state of decay. Rather it’s fully built. Several events happen throughout the year at the memorial. Visit their site for more.

Everyone wants to visit Leavenworth, Washington. It’s understandable. But it can be nearly impossible to find a place to stay at certain times of the year. Wenatchee is just 30 minutes from Leavenworth but finding a room is a lot easier and more affordable. Plus, Wenatchee is just as beautiful and boasts access to the same mountains, trails, waterways, and outdoor activities. See what’s new in Wenatchee

Tourist favorites: Mission Ridge Ski & Board Resort boasts 36 designated runs and 2,000 acres of trails. This winter, and summertime, wonderland is just 12 miles outside Wenatchee and claims to be the sun-shiniest of all the mountains in the area.

Don’t Miss: The Apple Capital Loop Trail is a pedestrian and bicycle path that crosses and rolls alongside the famed Columbia River. The trail connects the two parts of the city.

Hidden Gems: The Wenatchee Valley is known for its agricultural bounty. Take a short drive, or bike ride, into the area’s farmland, and you come across plenty of roadside fruit and produce stands. If you don’t make it to a fruit stand, check out the seasonal Wenatchee Valley Farms Market at the Pybus Public Market.

Start Your Next Adventure at Coastal

Your Northwest-owned and operated Coastal has everything you need for a great adventure, including pet treats and toys, western wear and outdoor gear, as well as hiking boots, socks, and snacks. Stop by today and check out our full line of Yeti tumblers to store your hot and cold beverages.