Everything You Need for Calving Season

Everything You Need for Calving Season

Country life has its magical moments. Calving isn’t always one of them, unless you’re well prepared, know what to expect, and subscribe to an old cattleman’s saying: Hope for the best. Plan for the worst.

With some help from Justine Ferguson of JSL Angus in Madras, Oregon, we’ve put together a quick guide as well as a list of items you’ll want to have on hand to make calving as easy as possible.

Ferguson is an Oregon State University graduate with a degree in Animal Science from the College of Agricultural Sciences. That impressive degree includes an emphasis on beef and dairy. She knows her stuff, starting an artificial insemination business with her family. Today, she’s working outside nearly every day (one of her favorite places to be) and working with animals (another one of her favorites).

Depending on when the cow gets pregnant, you’re going to be busy a little over nine months later. Ferguson checks on her cows three times per day as they get closer to giving birth. According to Ferguson, a cow can give birth, clean up, and begin nursing in just two hours. Of course, that all depends on the weather. Snow and colder conditions can slow the processes tremendously.

“If they don’t give birth on their own and we find the cow somewhere in the field, I generally know they’re in trouble,” Ferguson added.

That’s when you’ll want a certain staple of supplies on hand. 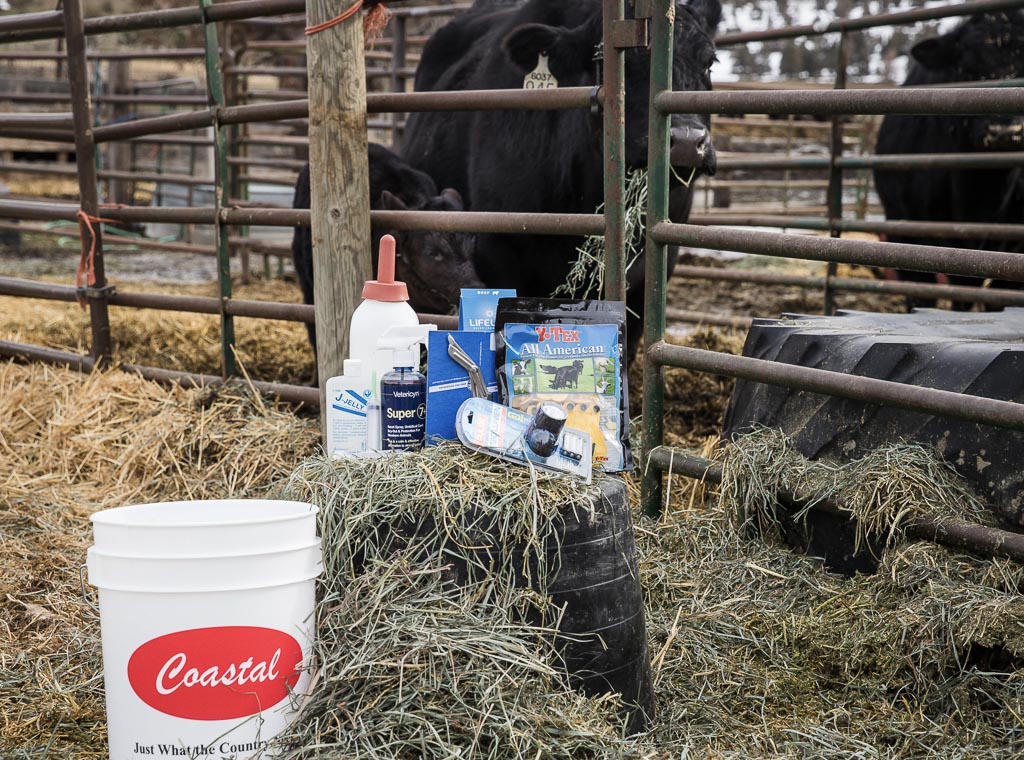 Of course, you don’t need to help with every birth, but there are a set of items you’ll need on hand. These include


While all of these items can be essential, one of the most important items is your vet’s phone number, as well as a backup vet just in case.

When Cow and Calf are in Trouble

According to the experts, one of the biggest threats to calf health is difficulty during birth.

“You’ll likely have problems if you’re mating high birth weight heifers to bulls with genetically high birth weights,” Ferguson explained. “But the cold weather plays into it too. Even genetics cannot fight against a cow eating more than usual, which happens during colder winters.”

Even if a calf is not in breach, cows can have a hard time giving birth due to those higher birth weights.

“Nine out of 10 times, calves get stuck at their shoulders,” she said with confidence.

That’s when you’ll want to call your vet, or choose to help the calf out with chains or another method on your own.

The series of events goes something like this: first, apply plenty of lubricant to the birth canal, secure the cow, then attach the chains to the calf’s legs (between the hoof and pastern joint). Once secure, pull with just enough pressure to ease the calf out without injury. Be patient. This part can take a while.

Once the calf is born, be sure it nurses. If needed, give a colostrum supplement. This is also the time to give your vet-prescribed injections and any vitamins the calf needs.

Finally, apply some ear tags and watch the calf and cow closely for any issues. If you’re looking for the definitive guide to calving, check out the Calving School Handbook from Oregon State University.

You’ll find everything you need for calving season at your nearby Coastal Farm & Ranch. Have questions about calving and what to expect? Our folks know a thing or two. They’re ready to help you plan for the worst while you hope for the best.